The Anatomy of the Eye | Anterior Segment 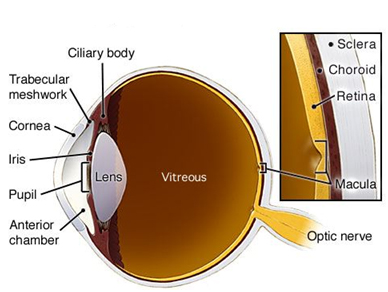 The anterior segment refers to the front-most region of the eye, and includes the cornea, iris, and lens.

The cornea has 5 unique layers each providing a specific function. It is also very unique in that it is avascular (no blood vessels) to allow light to easily pass through for clear vision, but instead it receives its oxygen from the outside air.

Iris
This thin circular disk is what gives the eyes their color and has a hole in the middle of it called the pupil. This structure actually consists of two muscles; one that constricts or makes the pupil smaller (sphincter muscle) and one that make the pupil larger (dilator muscle). These muscles work against one another to constantly control the light that enters the eye to maximize vision and control focus – similar to the aperture control on a camera. The color of the iris is very simply explained by the amount of pigment cells present in the muscles. The more pigment, the darker the eye, the less pigment, the lighter the eye. This explains why individuals with very light blue eyes are more light sensitive, since the lack of denser pigment allows more light to enter the eye through the iris.

Pupil
Not so much an actual structure, the pupil is simply a hole in the middle of the iris that allows light to enter the eye. The size of this hole is controlled by muscles in the iris and enlarges under dim illumination (like driving at night) and gets smaller or constricts under strong illumination (like bright sunlight). Malfunction of the pupil and iris are often signs of neurological problems. Additionally it is through this hole that doctors assesses the health of the interior of the eye, often putting pharmacological or “dilating” drops in to force the pupil open and allow clearer viewing of internal structures.

Conjunctiva
Many people know the “white” of the eye as the sclera, however, overtop of the sclera is a thin transparent tissue that covers the front of the eye as well as continues onto the underside of the eyelids. This slippery, mobile tissue allows the lids to blink and slide easily against the eye with little friction. This tissue is also highly vascularized and sensitive to inflammation or potential infectious agents like bacteria or viruses. When the eye gets “red” it is the conjunctival vessels that are enlarging with the goal of bringing more blood cells to the area to fight off a potential infection. When this happens, the inflammation or infection of the conjunctiva is called conjunctivitis or more commonly known as “pink eye.”

Ciliary Body
The ciliary body is a muscle that sits behind the iris and is responsible for two important functions. First, this muscle is attached to the lens of the eye by many thin fibers called zonules. When the ciliary body contracts, tension is taken off of the zonules tethering the lens and the lens is allowed to change its shape. The technical term for this autofocusing is called accommodation and it is used for looking at near tasks like reading a book or working on the computer. In addition to accommodation, the backside of the ciliary body has cells that secrete the fluid (aqueous fluid) that fills up the anterior chamber of the eye where it is drained out through the trabecular meshwork. If the ciliary body makes too much aqueous fluid or if the fluid is not flowing out fast enough, the pressure in the eye can increase. High eye pressure is a significant risk factor for developing glaucoma and many glaucoma eye drop medications target the ciliary body and decrease secretion of the aqueous fluid.

Anterior Chamber
This is a term used to describe the area in the anterior 1/3 of the eye from the back surface of the cornea to the crystalline lens.

Aqueous Humor
This fluid fills the anterior chamber bathing and providing nutrients to ocular structures. This fluid is made from cells on the backside of the ciliary body and then circulates throughout the front 1/3 of the eye until it flows out of the anterior chamber through the trabecular meshwork. If this fluid is made faster than it drains out, the pressure in the eye can increase and elevate an individual’s risk of developing glaucoma. Not surprisingly, all glaucoma medications and surgery either stop the eye from producing as much aqueous fluid or aid in faster drainage of the fluid. Either mechanism of action results in decrease eye pressure and halts the progression of glaucoma.

Trabecular Meshwork
This meshwork of connection tissue is located where the iris meets the cornea and functions by draining the aqueous fluid from the front of the eye and through the Schlemm’s canal, back into the blood stream. Very commonly, the trabecular meshwork does not function properly in patients with glaucoma which cause a backup in fluid and increased pressure in the eye. Several very effective medications and surgical treatment exist to the increase the fluid outflow through this structure.

Crystalline Lens
This is a biconvex lens that sits behind the human iris. The human lens takes the focused light from the cornea and focuses that light onto the retina. This lens is different from the corneal because it has the ability to change its shape to allow for accommodation or autofocusing to allow us to see up close AND far away. Unfortunately, the crystalline lens begins to harden as we age and loses its flexibility; this results in presbyopia better known as the “curse of the 40’s.” Over time the human lens also starts to become cloudy. This cloudiness or opacity is known as a cataract and once a cataract reaches a certain point it requires removal through cataract surgery.