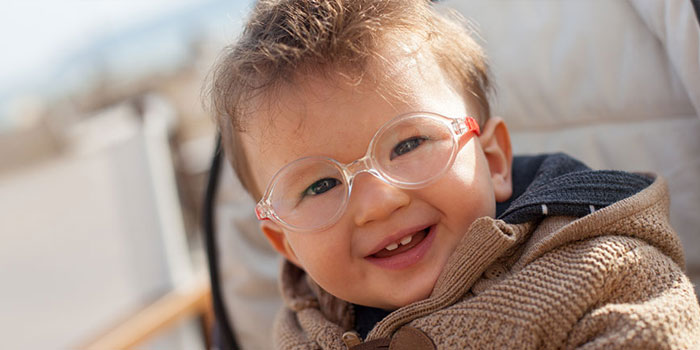 Most parents don’t realize it, but children are born without the ability to do most vision and ocular related tasks that adults take for granted. Like everything in a new baby’s life, vision is learned!  Here we will look at the benchmarks of how learning vision in infants occurs.

• At birth, a baby’s visual system is in overload. Colors, shapes, light, moving objects, and foreign designs flood the visual system and the eyes begin to make connections to the occipital lobe of the brain (all the way in the back) which starts the vision development process.
• At this point, a newborn’s vision is very poor. Typically infants are only able to focus up to 8-10 inches away, but this improves rapidly.
• During the first two months of life it is extremely normal for an infant’s eyes to lack coordination and the eyes may appear to wander or cross. Although usually normal, if an eye appears turned in or out continuously, this should be evaluation.
• By three months, eye coordination will have improved as the brain learns to control and coordinate the six muscles that move each eye and babies will begin tracking and following moving objects and reaching out for things.

• During these months, control of eye movements and visual related skills continue to improve.
• Depth perception, which is the ability to judge if objects are nearer or farther away than other objects, is not present at birth. It is not until around the fifth month that the eyes are capable of working together to form a three-dimensional view of the world and infants begin to see depth.
• Although an infant’s color vision is not as sensitive as an adult’s, it is generally believed that babies have learned the ability to see pretty good color vision by five months of age.
• At this point, learned visual skills will begin coordinating with motor skills as a child learns to use the visual information given to the brain to point, crawl, and grasp objects with some precision.

• By the age of nine to twelve months, babies should be using their eyes and hands together.
• At around 9 months of age, babies begin to pull themselves up to a standing position. By 10 months of age, a baby should be able to communicate between the eyes and hands enough to grasp objects with the thumb and forefinger.
• By twelve months of age, most babies will be crawling and trying to walk. Parents should encourage crawling rather than early walking to help the child develop better eye-hand coordination.
• Babies can now judge distances fairly well and throw things with precision.

One to Two Years Old

• By two years of age, a child’s eye-hand coordination and depth perception should be well developed.
• For the first time, the connections between the eyes and developing brain with allow children adult like – 20/20 visual acuity.
• Children this age are highly interested in exploring their environment and incorporating not only vision, but also integrating what the child sees with movement, balance, and senses like sound, smell, and touch to fully experience the world around them.

Throughout this process, children need routine eye care to make sure the vision is developing properly.